The story is about a friend called Lucy I knew at school, but it is also a very very old story, told thousands of times, probably as old as history.

Lucy was obviously very clever, she had been dumped in the Special Units at school because of her troublesome behaviour and managed to get out of them a term or two before  I did. Lucy lived with her mum in a tiny flat on a council estate. Her Mum was an alcoholic with mental health issues, there was no Dad. Lucy was a superb shoplifter, who whenever caught would deliberately breath so hard and fast she’d give herself a seizure. If she did this at school I was always the one the teacher chose to sit with her, I don’t know why, my epilepsy wasn’t diagnosed till much later.

Richard was very In with the In crowd. He was cool, fashionable, good looking, good at sport, not all that bright but then being too bright would have spoilt the image. Richard was in the middle band at school, being a very middle kind of chap, and it was his class Lucy managed to move up in to from the Special Units, and where I followed later.

I remember the biology class with maggots. The screams as they were thrown across the room, boys trying to stick them down girls shirts. I remember Lucy being cornered by Richard and a maggot, her squealing, him with the maggot between his thumb and forefinger and a sneer on his lips. This may have been where the romance started, I don’t know.

Lucy asked me into the girls changing room for an important talk. “I’m going out with Richard!” she said in an excited whisper “but you mustn’t tell anyone, it’s a secret”. I knew why it was a secret, she was a Special, like me. If you came from the Units you were a Special and there was nothing you could do to change that. A fashionable boy like Richard could not be known to be dating a Special.

Lucy was crazy about Richard. In love. They slept together. For 15 she was very sexually confident, I remember her once brashly informing the biology teacher, as he tried to demonstrate how girls walk,  that girls and boys were different not because of the way they walk but because “he has a penis and she has a pussy”. She  of course told me the details of her and Richard’s love life, as teenage girls do tell their friends. She was so happy how could she resist telling me? And Sasha, also from the Units, and a few other friends that could perhaps keep a secret.

The relationship went on for over a year. Lucy arranged it so she had lookouts, so her and Richard could have a snog behind the bike sheds without anyone finding out. Richard didn’t mind Lucy’s friends from the Units knowing, as we didn’t count. The secrecy excited her obviously, but still she longed to be accepted as equal. In class Richard became increasingly cold and cruel towards her, she’d often be in tears after School.

Eventually of course, as maggots munch and school girls gossip, the secret slid out. Fashionable people were sniggering at Richard in the corridors, whispering about him in the Gym. To think that he was seeing her!

What could he do but create a scene? Demonstrate publicly his contempt for her.

It was Friday afternoon break time, a hot summers day. Lucy, Sasha and I had dumped our bags on the grass in a pile outside the music huts and were lounging on the grass a few feet away.

A football is kicked over on to the bags, Richard comes running after it, but instead of retrieving the football he kicks Lucy’s bag into the air.

“Richard, that’s my bag!”  Lucy giggles, hoping that Richard is going to pay her some attention.

Richard carries on kicking it.

Lucy runs forward to try and grab the bag, by now a crowd has started gathering round and cheering Richard on as he dribbles the bag between his feet. Lucy reaches forward and grabs Richard’s arm, he pushes her off, she tries again, he knocks her to the ground. She’s lying there crying looking up at him with big puppy dog eyes. He kicks the bag into her stomach hard and spits on her.

“Fucking slapper!” he shouts “get back to the Units you stupid dirty whore!”.

Laughing and cheers come from the audience as Richard struts off.

Lucy stays lying on the floor, her head buried in her arms, panting. I try to calm her down, get her to stand up. The audience disperse, not wanting to be seen as responsible for what’s happening. She can’t get up but roles over into a crouching position. I sit there next to her, not a lot I can do now. Snot and tears and saliva merge into a constant trickle flowing from her chin, she is shaking, swaying, gulping and choking, turning every colour and eventually blacking out. I just sit there. I know it will pass, as all things do.

I knew also that there were planted little maggots in our heads munching on brain matter for the rest of our lives, and the maggots whisper  “No one can love you, because you’re just a stupid dirty whore from the Units.”

There are several hundred people living under London. No one can say when the first people started living down there, but it has certainly been growing steadily since 2000.  They are a close, strong community due to the harshness of their circumstances. The elder generation are mainly people who lost their homes during the big recession, those who couldn’t get jobs, the sick and the disabled who were abandoned as successive governments privatised the NHS.

The elder generation, although mocking of the above-landers, still hold a buried shame and desire to return to the daylight. The second generation however, now in their late teens and early twenties, don’t have this desire. Born in the tunnels they are proud of what they are, scavenging is their art and the above-landers are cattle to be milked.

The biggest difficulty about living down there is finding clean drinking water. Although Underlondon is partially flooded most of the time, and contains the old buried rivers of London, the water is dirty and the rivers have become sewers. Instead the people of Underlondon have sort out the ancient springs, trickles of fresh water flowing from cracks in the brick work. These springs are precious to the people down there and the holy qualities of the springs, appreciated in the past, are returning.

Where as many an above-lander has come to the rational conclusion that there are no gods, the Underlondoner knows there is nothing more rational than treating what sustains your life as Divine.

( I know I should be listening to CD’s instead of writing this, but I really can’t stand those little black speakers I’ve got, and when I do listen to a piece I like on CD I have to listen to it again and again and again.)

Please Note: This blog does not in any way advocate stalking!

It was a Wednesday in autumn when we first decided to follow him home. He’d been getting popular at school. The traitor! We’d never actually talked to him, but we knew he knew he was one of us.  Now damn it he was beginning to betray us, finding other friends. We had to take action!

We both bunked our last lessons that Wednesday, spent the time wondering round Erith market looking suspicious. We returned to the school gates at five to 4. It was a large school with 2000 students, a lot of them spending time hanging round the school gates, so we weren’t conspicuous. He came out on his own, late, head down, hands in pockets of a well designed overcoat, looking very much alone. We felt a little waft of emotion, he was one of us! Though the overcoat did suggest a level of expensive fashion that we could, despite our shop-lifting escapades, never hope to meet.

We were quite good at stalking. You might think that as teenage school girls we’d be all giggly and silly. We weren’t, we were taking it very seriously. Barely talking to each other at all, just nods and eyebrows.

He walked fast. Down the small roads and alley ways that cover Northumberland Heath. We had to almost jog to keep up with him. It was only because he stopped to get a coke from a grocers that me managed to keep on his track, though Sasha, red faced and gasping for breath, almost gave us away outside the store . We pretended to be fascinated by the marrows. They were big.

On and on he went, till I didn’t know where we were. It was posher than Erith, big houses and large trees lining the roads. He turned a corner into a wide quiet street full of detached houses, and vanished.

We were exhausted, Sasha was almost bent double wheezing and I was feeling very light headed. It was about 6 o’clock and quite dark, we had missed our usual post school activity of stuffing spaghetti hoops in front of horror movies at Sasha’s. We needed replenishment. So it was agreed we’d continue the hunt the following night but right now what we needed was an extra large Mars Bar each and some Nightmare on Elm Street. 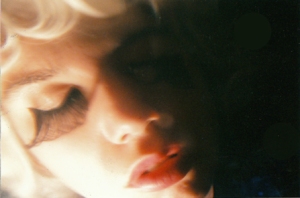 We took to sneaking looks into the boys changing room after sports. It smelt of sweat and old trainers. It  hummed with chat and laughter to the timing of dirty jokes. He was good at sport. That impressed Sasha who was so rubbish at it she used to pay me to come last in races.

He was muscular and tanned and what with the blonde hair he certainly got Sasha excited. It was the time of the band Bros, that look was what girls were supposed to desire. Sasha was a big Bros fan. She was going to marry one of them she told me.

Sasha was a plumb talkative girl with mouse blonde hair and big breasts that I greatly envied. A couple of years later I would date an evil bastard of the muscular blonde type, not because I liked him or even fancied him, but just to make Sasha jealous.

However, I was NOT into Bros. For me it was Micheal Jackson ever since me and my brother  snuck out of bed to watch an illegal copy of Thriller my Dad’s dodgy friend brought round. Its an even more thrilling (sorry) video when its illegal and you’re supposed to be in bed.

More recently Sasha had shown me her copy of the Labyrinth and we were both madly in love with David Bowie (every word of every song he’s ever written is written for me! Not that I listen to his songs anymore).

I’ve always liked the mysterious and unknown. ‘Bed time stories that keep the curtains closed’, and way back then it seems I was also in to skinny, slightly effeminate, men in tight trousers.

Excitement, thats what we needed. We were bored teenage girls living in a South London suburb as the 80’s turned into the 90’s. Stalking was a means of having fun. We also held seances in graveyards.

Soon sneaking looks through into the boy’s changing room just wasn’t enough. We pinched one of his exercise books. It was disappointing. All he’d done was write his name in blunt pencil. No that wasn’t enough to satisfy our needs. We wanted detail. We wanted dirt!