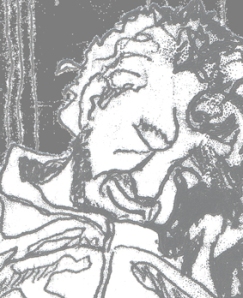 Abel stumbles and falls into the ankle deep drain water. He’s been in the tunnels for 5 hours and found nothing but sewage and rats. He’s only managed to keep going through fear of what he’ll become if he stops. Dread is tap dancing heavily in his head, and something seems to be following him. He is lost. Actually he is in the storm drain that carries the Westbourne river to the Thames, but he doesn’t know that.

He tries to get up again but only manages to slide the upper part of his body against the tunnel wall. Then he passes out. If Elsie saw him now she wouldn’t recognise him, he looks so old and ill.

It is the mad harmonica lady that finds him, turns out she knows her way round the the underground rivers very well. She dances along the tunnel, her ripped skirts trailing through the water, singing to herself :

She grabs his arm and drags his now corpse-like body over her shoulder. She is surprisingly strong for an old lady.

When Abel wakes he finds himself in a small cave-like room lit only by candles. There is what looks like an alter on the far wall, and straight in front of him is a roughly carved wooden Jesus on a cross with a hand painted sun as his halo.

I’ve just eaten a meal consisting mainly of veg grown in my back garden. Now I’m waiting to see if I survive.

Cooking doesn’t interest me all that much. My reason for  growing vegetables is more biological curiosity than allotment keeping, so I’m always amazed if I produce anything edible. Today they do seem to be, the meal was actually very nice.

The veg are grown in the same earth where I found the bones (Bones in the back Garden). I like the idea that the flesh on the bones fed the earth that fed the veg which has just fed me.

As long as I don’t think too hard about who the bones were.

I’ve been experimenting with cooking meat recently. I gave up meat almost 20 years ago, shortly after the knife incident in fact (Stalking part5. The Knife).

The new meat curiosity came about because I’m now a dog owner.

As a once long term vegetarian meat is a somewhat curious phenomenon. That thing I’m eating once had a character, it could see, it could feel pain, it may well have come to the gate to say hello to me if I passed it’s field. It’s body matter now becoming my body matter. The recycling of life.

Normal. But odd non the less.

Could I kill a creature to eat it? Certainly, if I needed to. Given certain circumstances and a detachment. I imagine I could enjoy it. A switching from empathy to consumption.

A farmer near where my parents live calls all his sheep by the same name (Betty I believe) to help prevent him getting attached to any one of them.

Another farm near there kept a lamb. It’s mother had died when it was born so they had  bottle fed it and it became part of the family. They called it Dot.

Then one day the father decided that it was time to eat Dot. They would have her for Christmas dinner.

He prepared the children for this, telling them that this was the cycle of life, things must die and be eaten by other things, that was how life continued.

The mother carefully prepared and cooked the creature, then presented it at the dinner table. The father announced that they were now going to eat Dot the lamb and the mother took the carving knife and cut them each a slice. The two children started eating the meat without a second thought. The mother did the same. The father paused, got up from the table and without a word left the room. He never took a bite of Dot.

Stars. They’re useless! Up there in the sky with that know it all look about them, that “I can tell your future” twinkle. But they can’t! Hot Passion, huh! I had a bad cold and the electricity men hitting things with hammers in my hallway. Rubbish! Then there was that greasy good-for-nothing guitarist Mr Cos, coming round here stealing CD’s, thinking he’s got the right just because they’re his. The cheek! Mr G Avern, my reliable bassist and  Other One, has hand lurgy so he’s no good, he can’t protect the CD’s from Cos. All useless!

At least I have my ghosts:

I made the box for the bones found in my back garden. I have only drawn a dog’s skeleton on the top because I don’t want to think of it being a murdered wife or anything. I like this flat I’m now in and love the garden so don’t want them to turn bad against me. It probably was a beloved dog whose flesh has fed my garden, yes I like that. When I die I want to feed other things, to rot, to be eaten, to have the roots of nettles and sycamore trees creeping through my bones. I say sycamore trees because my garden is full of them, the garden must have been a tiny sycamore forest till they were all chopped down, now they’re growing back again with avengence which means at some point I might have to do some gardening.

Interestingly I’ve been having a good hallucination of late. There’s a dog in my flat, a mongrel, very friendly wagging its tail , I bend down to stroke it and it’s gone. I like it though, beats the usual insect and bird monster hallucinations. I did consider that it might be the ghost of the dog whose bones I’ve put in the box. Possible. Or it might be that dastardly part of my brain that does things without my consent deciding that it wants a ghost from the bones and therefore creating one. It does that. The dog vision isn’t as strong today as it has been the last few days, I kind of miss it. I’m still trying to get a real dog though, the lady from Battersea Dogs Home is coming round to inspect my flat on Friday. Worrying. Do they give dogs to people who hallucinate dogs? Perhaps I shouldn’t mention it.

Today was a day for considering the bones in my garden.  Why today I don’t know, had planned to make paper from the heap of paper pulp currently festering in my kitchen, but somehow at 2 this afternoon I found myself writing a song about the bones I had discovered.

I moved into this flat a year ago, it’s a nice flat despite sitting on an edge between a massive road and the train line. The nicest thing about the flat is that it has a garden. When I first moved here I had an idea about being a great gardener, but this soon faded as I came to realize the state the garden was in. It was a mess! And underneath all the nettles was junk, bottles, cans, razors, the remains of a mattress, old rotting clothes. You can’t park a car anywhere near my flat so I couldn’t get anyone in to help clear the mess. I temporarily gave up on the idea of doing major work on it and instead decided to have a wildlife garden. Right, I thought, well frogs, and in fact all amphibians, are on the verge of extinction, so what I’ll do is build a pond. I started digging. Then I found the bones.  Lots of them of all different shapes and sizes.

Now when you find things like bones it gets the brain going, wondering what they are from. Are they one creature or many? Are they a pet dog or a person?

The last occupier was a man called Wolfgang. I think he was a nice person, feels like he was, the flat has a pleasent feeling to it. The neighbour says Wolfgang was “a right care in the community case”, he was certainly eccentric, had crammed the place full of gadgets and wires according to the removal men. What had happened to Wolfgang? Had he died? Did Wolfgang know who was buried in the garden?

When Wolfgang had lived here the garden had been very overgrown, the council had come along and chopped some huge trees down. Then there was all the rubbish I’d found, the clothes still on a clothes line buried under a layer of mud with moss growing on them. I started to worry that the place might be haunted, I was living there alone but there was always the feeling of someone else being near. Next band rehearsal I mentioned this to the Rude Mechanicals. Tommy G rather brilliantly wrote the song Wolfgang in which there is a seance and Wolfgang possesses me, but it turns out that he’s a very normal old man who says “I know” a lot and likes chatting with Greta Garbo. This made things seem much better, and now I have a friendly ghost living here with me and the Rude Mechanicals have a fine, rather odd, seance song for the end of The Cyclops & The Wildebeest album.

Back to today. My garden is fascinating! I’ve decided to build a box for the bones. The Bone Box. It is going to be quite lavish, maybe with some gold leaf, and on the box lid I’m going to put a picture of skeletons, one of a dog, one of a cat, and one of a human. And maybe I’ll finish the Back Garden Blues song I started writing at 2, and that can go in the box with the bones. Maybe I should take the box along to a rehearsal to find out what the Rude Mechanicals make of it. But first I must finish the box and wash the bones!