So here we are at the end of January. It has been a difficult month for me, and my neighbours sewage is still gurgling and grumbling it’s way into my bath. I’ve called it Gertrude.

Will be seeking advice from lawyers and MPs this week.

A friend of mine was discussing the possibility of him having a midlife crisis. To do something exciting and life changing now. I think I am having the opposite to that, I had my mid-life crisis in my twenties and became Miss Roberts. Now I find myself attracted to the idea of a steady job, owning my own house in the country with some cats, a dog, some ducks, a goat. There would be a wood at the end of the garden so I could sit and daydream or forage for materials to make paints. The problem would be that I’m not allowed to drive (epilepsy) and I like being near my friends, so I will have to take them with me. A small commune in the country…

My first mid-life crisis was when I got diagnosed with this old brain desease of mine. They said the creature was very big and buried very deep in my brain. They said I would have to have 6 or 7 operations followed by laser treatment to zap it which would all take years and years, but if I didn’t have it I would be dead in 10 years. After a lot of indecision i decided not to have the treatment, I enjoyed my life and didn’t want to spend it in hospital on what was only a 50% chance of being cured.

So, I thought to myself, if I’ve only got a little while to live I’d better do something exciting with it. Now I’d been a quiet child, and a sulky teenager, I barely spoke, but I loved the stage. The idea of getting up on the stage and performing thrilled me. I said to myself “well Roberts if you are going to die in a bit you’d better get yourself a wig and a fancy dress and get yourself up on that stage”. It was an excuse to misbehave.

So Miss Roberts arrived, and slowly the world around her became a somewhat less terrifying place, people (some of them) became worth talking to, and the monster, although it has given me occasions to think “right this is it, it’s going to kill me now” hasn’t yet, and ten years has come and gone.

Maybe I’ll marry an accountant or lawyer, that would be a good turn around for me.

Below is a picture of me as a child. A friend on the phone last night was telling me how he was a happy sweet child with lots of friends. I was the opposite to this, I was the scary child who never smiled and wore a black coat with hood up that I never ever took down.

Oh, and just thought I’d mention I’m making short video logs every evening (well most) that I’m putting on YouTube. The are on my channel, though I’m not sure what that’s called or how you get to it. If you find out let me know. 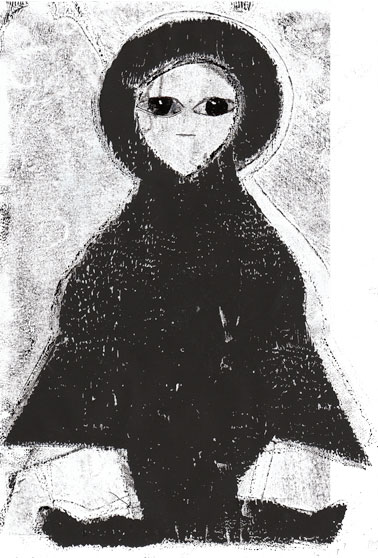