When testing out this blog on my mobile I discovered it had a huge great ad at the bottom saying “make-up for old women” . Immediately I felt insulted, apart from it being rather ugly in itself the ad seemed to be saying this was a blog by an old woman. Now I look back and wonder why is “old” an insult? the ad was unsurprisingly about how older women should put on make-up to appear younger. I have long preached the values of getting older, yet still I find being called old insulting and I shouldn’t. I know it is used as an insult a lot in our culture, particularly towards women, but I am surprised at myself for having gone along with it.

Obviously the aches and pains that come with age can bring one down, and I know too well the fear of approaching disability and death, but surely ageing is part of the beautiful changing process of life we all go through. The idea of not being part of that cycle is to me ugly.

So too look on the bright side – am I reminding anyone of the last scene in Monty Python’s Life of Brian here? – I am a hell of a lot happier now than I was when I was a teenager. I remember when I was about 14 a friend of my mum’s saying to me “enjoy life now because its all down hill after this”.  I have to say now, to my 14 year old self , that no, no it isn’t! I was a spotty, greasy haired unlovable geek then. Life has had many ups and downs but I am definitely far happier in myself now than I have been before.

I find with the passing years I worry less and less about fashion and other people are concerned less and less with how I am dressed. My clumsy, disorientated tendencies (which come with the brain disease that I’m sure I shall whine about in a later blog) are accepted more as eccentric behaviour and people are more helpful and empathetic than they were when I was younger. Now days I’m pretty much invisible to teenagers on the bus, and that is great, I can just potter along at my own speed unnoticed by the yobs that used to poke fun out of me. I know what is important to me, and who really matters, I know how to stick two fingers up to a lot of the crap that goes on.

I used to work in an office in my twenties, I hated that, perhaps even more than being a teenage geek. Me and the Rude Mechanicals did a song about it recently called Paperwork, the video for which, by Mat Green, is to be released this autumn.  Below are some images of the recent art installation I created in an office as part of Hammersmith Festival. It felt great getting the chance to mess an office up, chuck the paper everywhere and smash up the computer!

At the moment London economics, offices and people in suits are seen as the most important thing in the universe, but me, you, and the trees know, one day all that will disappear and the forest will return. 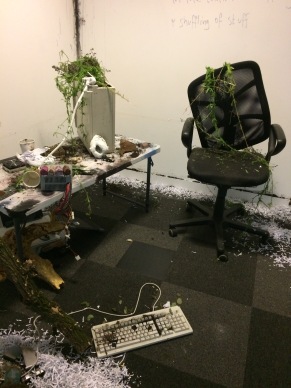 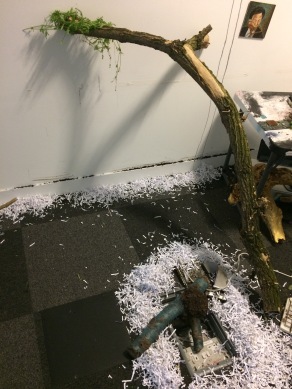 The Installation is called After and includes the works of Jill Rock, Marina Young and Gardyloo Spew

Perhaps this all makes me sound very old indeed, I’m hopefully barely half way through this changing process.  I enjoy my work, my friends, my flat and the very grumpy cat. I find the world incredibly beautiful, the tinniest detail can hold a million secrets and wonders. This is perhaps the desperate need for optimism in the face of incurable reality, but still – “Always look on the bright side of life…”